Click here for details of the layouts at our recent exhibitions at the Barnes Wallis building in the city centre:

To see what you missed in 2016. Here is a video filmed by one of our visitors

Thanks to acw71000 for permission to include this video 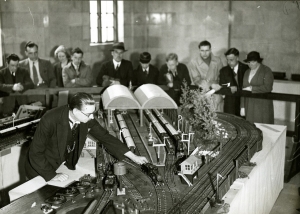 There were no public exhibitions during WWII, though meetings and displays of members’ work continued throughoput the war.  The first post-war public exhibition staged by the Society was a three day event in December 1947 attended by over 7000 visitors, although it did supply exhibits for other shows from July 1945 onwards.

Our annual exhibition has been staged at various venues, notably the Corn Exchange, UMIST, New Century Hall and the Armitage Centre.  Our 90th birthday year, 2015, was marked by the 78th public exhibition organised by the Society and a triumphant return to the city centre – the only Model Railway Exhibition to be held in the centre of a major UK city.

We have also appeared at many other exhibitions, for example the Northern Modelling Exhibition at EventCity, near the Trafford Centre, on 2nd and 3rd March 2012, where three members’ layouts were on display.