Over the years many of our members have been prolific in the development of railway modelling in this country, the United Kingdom.  Of particular note was Alex Jackson who is well known for the development of his unique coupling which is now used by many modellers worldwide. Full details, including new drawings showing critical dimensions.

Geoff Wilson found himself needing a number of gearboxes for Romford 30:1 or 40:1 gears and described how he solved the problem in the MMRS journal The Link in July and August 2008. Gear mesh is critical to smooth running – see how Geoff achieved this.

John Langan was another of our top modellers. He published a series of articles in the MMRS journal The Link during 1963 covering split-axle current collection, wheel bearings and sideplay.  If you have any interest in these topics, you may wish to learn from an expert (and avoid repeating his mistakes).

Dave Booth decided that he wanted a simple layout which needed the minimum of effort to transport and set up at an exhibition.  Here he tells how his baseboards weighed in at under 7lbs (3.2 Kg).

Making your own wheels

Our members were active in the development of “finescale” in the early 1950’s and EM gauge was a common standard in our club together with the Manchester Profile for wheels. Given the recent difficulties in obtaining supplies of finescale loco wheels, Dave Booth has produced an article about making your own from scratch.

With an increasing emphasis on getting those little details just right, after much research Colin Craig has produced a series of articles on the development of permanent way.  The first three parts are now available.

Adrian Prescott, who painted and lined professionally, gives hints and tips on putting those vital finishing touches to your stock.

Being a fan of the Great Western, some years ago I hand wrote a list of GW coach numbers, in order, with their diagram and building lot numbers.  This meant that, given a coach number, I could fairly quickly identify it.  More recently I have typed up the 35 page list and updated it to include steam railmotors, autotrailers, inspection saloons and Vale of Rheidol stock.  You are welcome to download a copy in either Word or pdf form.  Non-member Mike Flemming has added more details, particularly on the earlier coaches, and the full list is available as an Excel spreadsheet.

Information on LNWR coaches, including a search system to enable you to track down possible coaches from an unidentified photograph.

Non-member Joe Greaves has produced a 28 page list of book references for (mainly) pre-1948 private owner wagons and tankers.  Given the name of a company this will give you a list of references of all types in (mainly) post-1969 books. It may also be useful to see which reference books could help you.

Nearly 5000 photographs providing a historical record of the Irish rail network during the years 1937 to 1977, visiting several railway stations and lines before their closure.  Signal cabins and railway employees feature quite strongly as well as special excursion trains run by the Irish Railway Record Society.

If you would like an article on anything else let us know – there must be someone in the MMRS whose arm we can twist.

Many of our members have written articles for the model press and some of those writers have produced their own layouts to a high standard often exploiting new techniques and styles.  Of particular note is Bob Harper with his GWR Broad Gauge layouts seen at exhibitions all over this country and abroad.

To record these contributions we have stored them in a table and you are encouraged to dig out copies of the magazines and take a look.  We have copies of all of these magazines in the Library at Dean Hall.

Modellers seem to spend a lot of time trying to get ballast to look uniform.  However, these photographs from 21st May 2008 show the state of some real ballast.

Two years after the track at Gatley station on the Airport line was relaid, the ballast is still looking quite clean.  Between the rails there is some weathering, but it is in nothing like the state of that at Piccadilly.

Here are some photographs of the track at Platform 13 at Manchester Piccadilly Station and the track near Gatley. Piccadilly Platform 13 is a well-used line for trains which by-pass the main station.  In between the rails is a greasy gunge whereas the six foot way is more rusty brown. 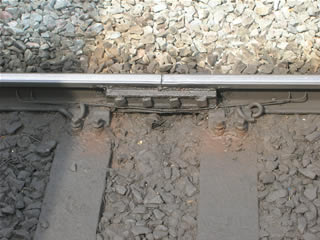 A well-greased rail joint where much of the grease has seeped into the surrounding area.  Contrast this with the relatively clean ballast past the ends of the sleepers - wherever the ends are. 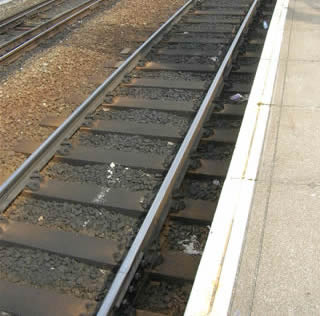 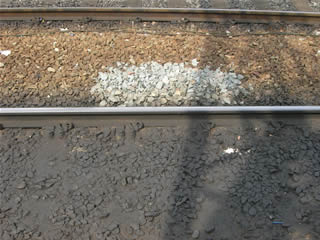 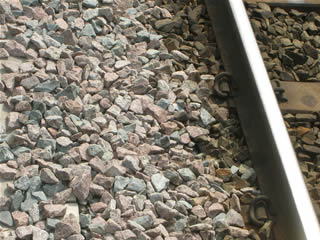 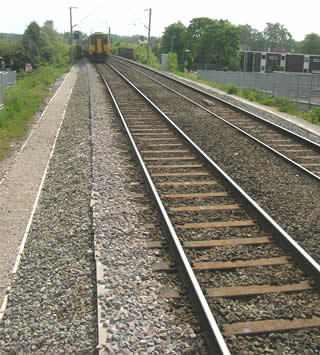