A new layout is always begun in slow phases with nothing happening for a while and then massive progress. This is no exception. With great thanks to the work of Dave Douglas we now have all the baseboards we require for the first scenic section and its associated fiddle yards.

With the arrival of the baseboards we can begin track laying. This means positioning individual pieces and drilling the holes and slots for electrics and point motors. Most work is done on Thursday nights 7:30 until 9:00pm so if you’re a member, or wish to join the Society, then please come along and see what’s invloved in helping us with this new layout. I’m sure you’ll enjoy working on the various aspects involved in this modular concept, Alan Kay.

It has been six weeks since we got into the full swing of building this new layout and wondering how to proceed with the concept of it being modular. So far we have made great use of Dave Douglas to build and produce the base boards and also as our chief mentor to instruct the team on how to lay track properly.

Now we are in a position to move on to the electrics and for this Aron is going to take the lead. His know-how will be used to wire the track, points and all other components as required even now consideration must be given on how to formulate the control panel and switches for each module I keep calling each phase a module as we do a great deal of work on one area at a time, this will be the basis of how we work expand in the future.

So in detail here is where we are:
Construction – 9mm birch ply used on all aspects of the timber frame of each base board, top sides ends and centre cross member.

Each baseboard is connected to the next by a single nut and bolt with alignment aided by dowels, the boards are only 340mm wide and don’t require excessive clamping to each other.  On the request of another wiring expert we have provided holes in the centre cross member so that any cables can be run across the underside of the base board with support already built in. Mike Bolton has advised us to do this as on numerous occasions, it has not been done on other layouts he has worked on and it has been more difficult to cut holes later on when working upside down in confined spaces and at strange angles across the supporting timber frame.We took his advice to ‘plan ahead’ and yes it proves very worthwhile.

We are using Peco code 75. We did make sure our planning was such that there are no points covering the central cross member and obstructing the position of point motors.

The construction of a baseboard also means that points cannot be placed directly at the edge of the base board for the reason just spelt out but also we paid attention to Murphy’s first law, if it can go wrong it will. Therefore each piece of track at a base board joint will, potentially, get damaged in transit storage mishandling accidentally knocked etc so it should be pre planned as a sacrificial piece of ordinary rail rather than lose point work. Track work is almost complete in the fiddle yard 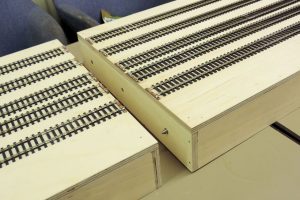 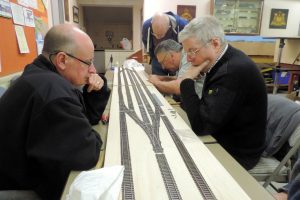 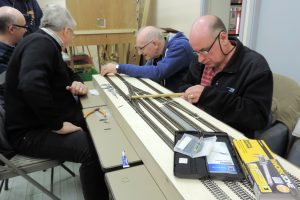 This phase is about to begin on the first of our laid track. We have had to plan for DC and DCC as the expense of chips sound chips and speakers could prevent you from using your stock on this layout. This will mean lots of wires switches and LED lights.

Here on Barton Road we are making great progress. Track in the fiddle yard is complete and wiring has begun. However we are in the market to use, borrow and steal ideas from wherever we can. Ralph has mentioned the very useful mutual improvement courses that are available. One such course has been on the use of 3D printing and the initial set up and programming that is required. He also stated that at least two members have since acquired 3D printers, Rob being one of them. As previously stated we will use good ideas when we can and Rob has produced a 3D printed base plate for mounting servos to be used as point motors. He is now on, at least, version three and this is perfect for our needs. Other bases are being used on Greenbrier Junction.

Also he has printed a base for us to help mount the electrical sockets for where we will need to cross board joints.
This goes to show the invaluable use of Ralph’s classes and cooperation between the different layout teams to help in the production of our own layout. We are still at an early stage of wiring, ideas are still being listened to, teaching is ongoing, so I still ask you to come and help any Thursday night, it is only 7.30 until 9.00. You never know you may learn something, you may give us help and understanding, you may even enjoy watching others produce something and become actively involved yourself, just give it a go. It is why you joined a modelling club in the first place to have fun and watch different trains go by.

Hopefully see you next Thursday, Alan.

Progress is being made with the wiring. Soldering ‘D’ plugs to tag strips in a modular way is another skill to be learned here. Several containers both card and plastic have been made for the container depot which will be a feature of the layout, complete with DCC controlled working overhead crane. I’m really curious about this one.

Many more containers still need to be made (about 300 in total) so if you feel like making card containers at home or at Dean Hall or getting involved in any other way come along and see what we are up to on Thursday evenings 7:30 till 9:00 PM and speak to group leader Alan Kay.

There is the usual banter, between bouts in which some work is actually done. It is also one big learning curve, especially for me, since my knowledge of DCC will fit on the back of a postage stamp with room to spare.

I am particularly curious about how the layout will be wired in such a manner as to be DCC or analogue control at the flick of a switch. All this highlights the benefits of joining a very good club such as MMRS, come along, get involved, tell us your ideas and we can all benefit. Don’t be shy, we are all friendly and ready to enjoy working on the layout and hearing fresh ideas.
Hope to see you on a Thursday soon.

It has been a while since our last report on our new build layout. This is only due to the fact that each week that has passed from the last report has been exactly the same. We have been soldering D-plugs to contact strips for a long time. Each board will have a 37 way D-plug soldered to a 36 way contact strip (wire 37 will be used as the power feed to the Over-head line equipment), this contact strip will then act as the power distribution board for that board. Unfortunately for us we also need to take a loom wire all the way through to each of the end boards. This also entails the use of a 37 way D- plug at each end of the board, ok now please do the maths and understand the sheer number of soldered connections we are making.

This time consuming episode will only need to be done once.

When the looms are complete we will set about wiring up the components on each of boards. Work has been on going doing mock ups of what we wish to achieve in setting the point motors. This entails using the 3D printed bases made by Rob to mount the servos, lined up to operate the micros-witch to change the frog polarity and utilising piano wire as the operating mechanism. This wire we are going to hold in place with a small wire in tube system to prevent any possibility of failure by the wire twisting out of the point. All this needs to be replicated across all the point work so we will use a card jig to position all the holes to anchor the various parts mentioned above. Then after all that we may be able to start wiring the contacts to the track and provide power to the rails.

Another topic we are meeting is the acquisition of usable stock. Container traffic comprises several different vehicles. Motive power in colour schemes from various eras, diesel and electric locos and small shunting engines, is now starting to appear and you may see some of this being tested on Dewsbury Midland and their faults will then be corrected.

More progress is also being made elsewhere on other elements that will be included later on, for example, the working mechanisms of the crane are being trailed before the final build into the single working unit. In this regard Rob has made a purchase of a small drone with a camera and TV display screen. this will help when loading containers as you will get a vertical view of operations.

All this is still at an early stage. We still meet on Thursday at 7-30. So come and help, instruction will be given even if it’s only to tell the time to go for refreshments!!

On behalf of the team,

Following on from last month, the time consuming  job of wiring ‘D’ plugs to tag strips is almost complete and wiring has been installed to the point motors which are mounted on £D printed mounts made by Rob. He is making progress with the DCC operated container crane which will be a major feature of the layout (see Link 931, page 21) while the other members of the team are making some of the 300 card kit containers which will be needed. These will form the background while the ones which will be picked up by the cranes are made from plastic kits. 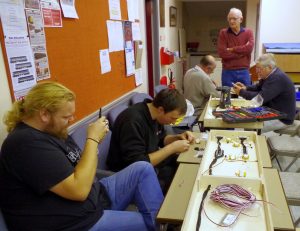 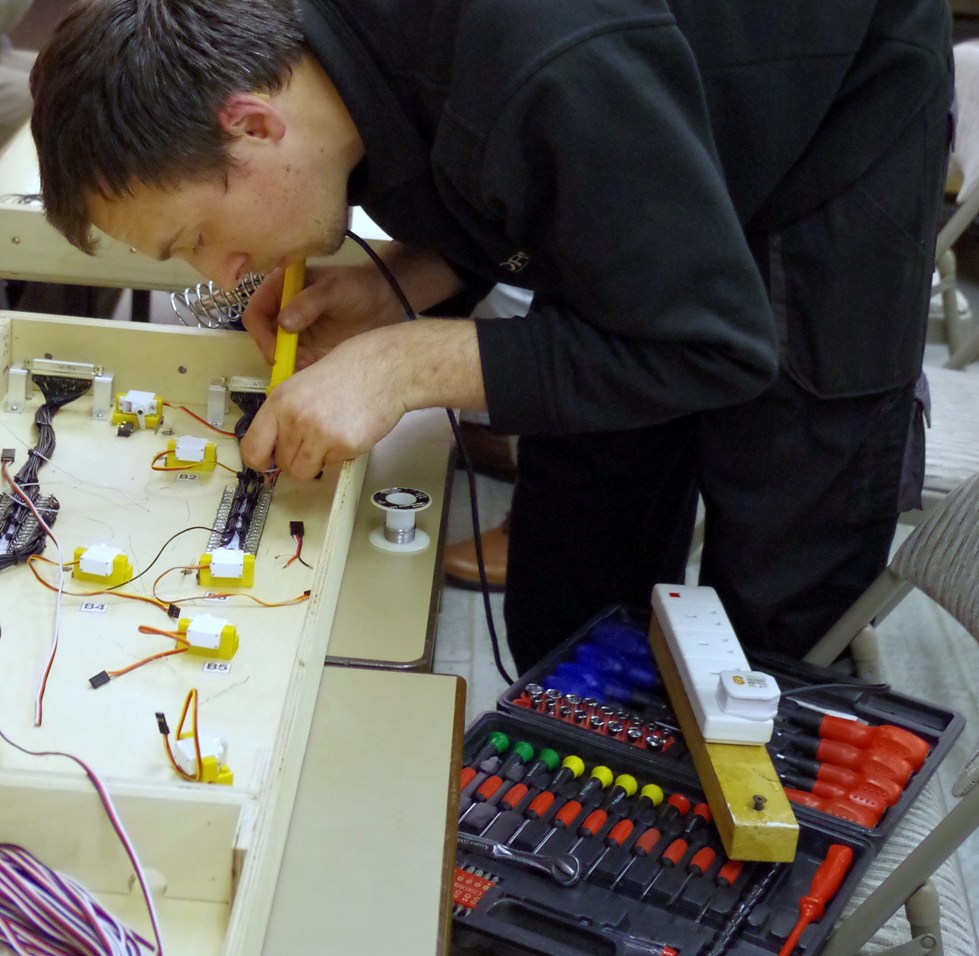 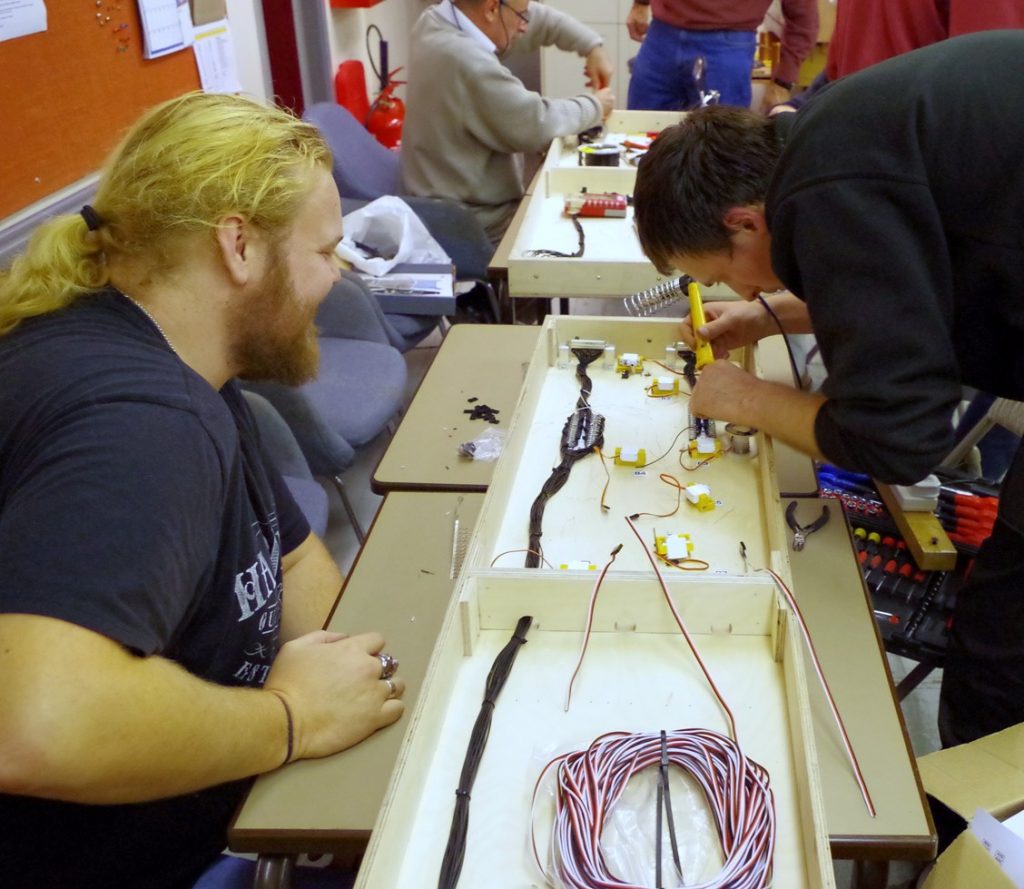 When fully assembled the layout will be L-shaped, and some 22 feet long. It will be able to be erected in just one hour and dismantled packed in the van and ready to head for home in the time (or less). Much work remains to be done, so if you wish to get involved, come along on Thursday evenings 7:30 til 9:00pm and speak to the group leader, Alan Kay. 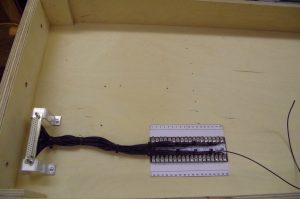 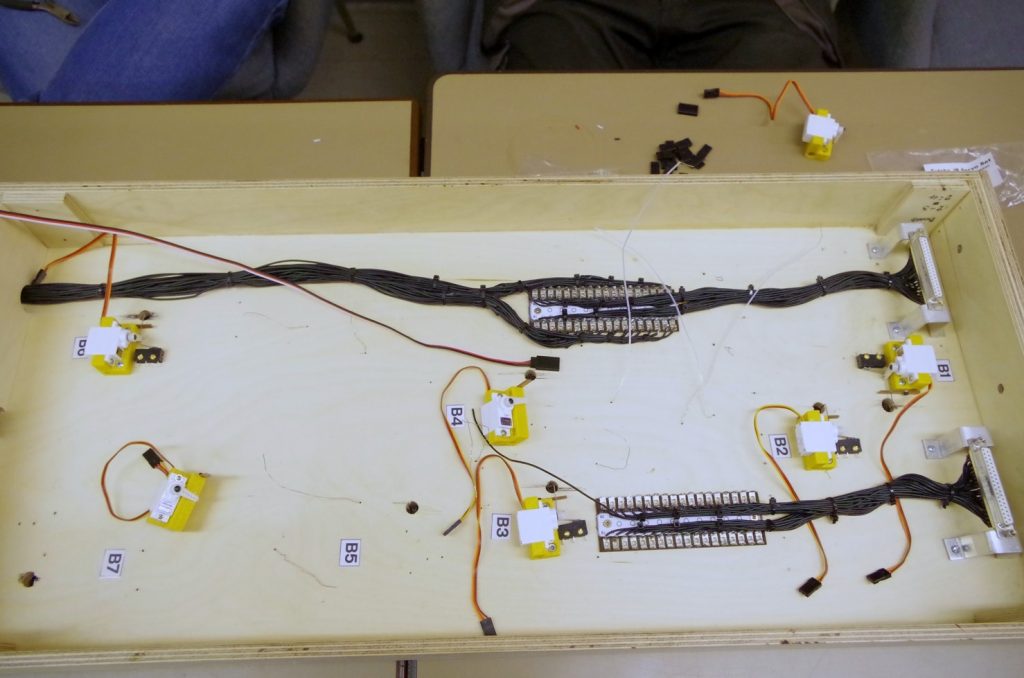 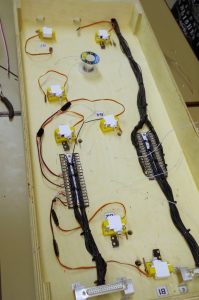 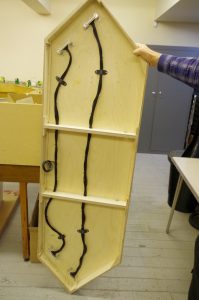 The wiring of the baseboards is almost complete and testing is about to begin, before we start to build the control panels.

We are also beginning to acculmulate locomotives and rolling stock which represent quite a wide timescale in order to cover the various eras we wish to include in the hope that there will be something to interest everyone. These will include mainline diesel and electric locomotives, together with BR steam, industrial steam and diesel shunting locos, and various forms of container traffic.

Here are a few sample photos of some of the shunting locos we have,  more photos of mainline locomotives and train formations will follow in the coming weeks.

Here are some photos of Barton Road rolling stock showing the wide variety of rolling stock we can use on the layout, depending on the era we are operating, which could be anything between 1965 and present day.