Our P4 group began in 1985 when some members decided to build a test track which later grew into a layout, Bradwell, which was exhibited at over twenty exhibitions between 1989 and the late 1990s.

Through exhibiting Bradwell and looking at other P4 exhibition layouts we decided that a continuous layout would be more appealing both for operators and for the viewing public.  It would also show that P4 could go beyond the branch terminus and use large outside cylinder steam engines successfully at express speeds. The result is Slattocks Junction.

The design of the layout dropped the station, as it was felt that it would take up a lot of space and add little to the operation potential, although the station building will in fact exist on the overbridge at the left hand end of the layout.  At the opposite end is Slattocks Junction itself representing what is in reality Castleton South Junction.   In the middle is a small goods yard that also serves an industrial branch which winds off to the right hand side of the layout.

Slattocks is North of Manchester between Castleton and Middleton on the Calder Valley line (Manchester Victoria – Rochdale – Summit Tunnel – Leeds).  Our model is not a copy of what is actually there but an amalgam of features from the area, including the junction and the Rochdale canal which forms the boundary between the country end and the town end.  This also happened on the prototype.  If you travel on the M62 towards Rochdale (Jct 20) you will travel over the former alignment of the Heywood Branch of the Rochdale Canal just before the point where the motorway passes underneath the railway.  To your left is Castleton, and to your right is Slattocks.  View Map

The layout is set in the period 1955 – 1965.  This allows an interesting variety of stock from pre-grouping through to green diesels.

The layout was fully operational until June 2009 but the scenic trackwork needed relaying – see Dick Petter’s article in Model Railway Journal number 203 for full details.  At the same time the electrics have been redesigned by Mike Bolton using the latest CBUS technology.

Scenery is developing with most of the basic landscape nearly complete, the aim being to match the standards already set by Dewsbury Midland.  A number of buildings are under construction including the first of two signal boxes.

Thoughts have turned to the provision of the layout’s lighting which will be tricky due to the depth of the baseboards and the fact that we want a completely clear view at the front of the layout.  The lighting needs to be in place before the final colouring begins on the track and scenery.

With such a large layout we will need plenty of stock suitable for the area and period and members of the group are busy building this.  Ralph Robertson is producing etched baseplates for wagons and Craig Whilding’s article in Model Railway Journal 200 described his scale etched wagon underframes.

Slattocks is a large project and if you interested in P4, scenery or making buildings we will be happy to welcome you into the team, which normally meets on Monday nights.  The group leader is Tony Williams.

December 2006. Dave Booth and Sid Stubbs (at the back) are having a technical conversation.
Andy Goodman is hoping that DCC controllers aren’t as complex as everyone says. 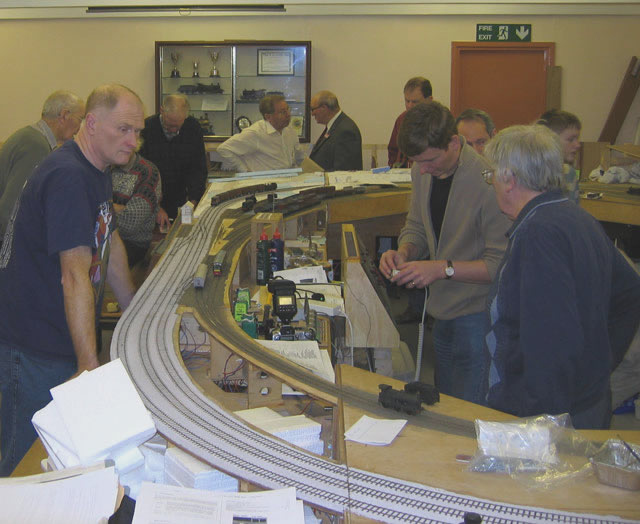 This photo was taken in February 2007 and shows the scenic extension which fits on the front of the layout. 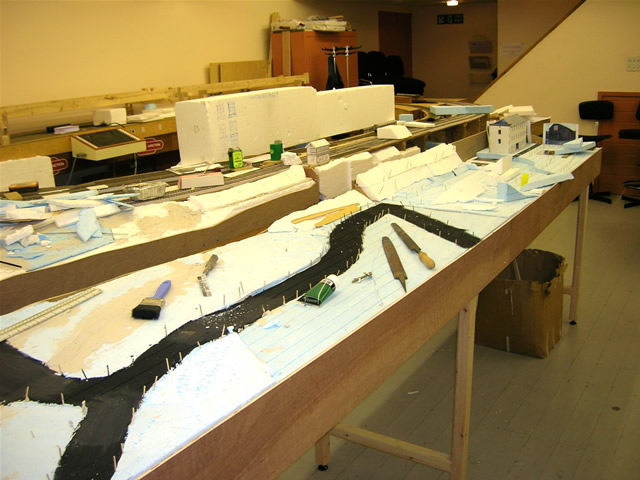 At the running session on 10th August 2007 the fields on the scenic extension have been plastered with a green mix and mock-ups of various buildings and structures have appeared. 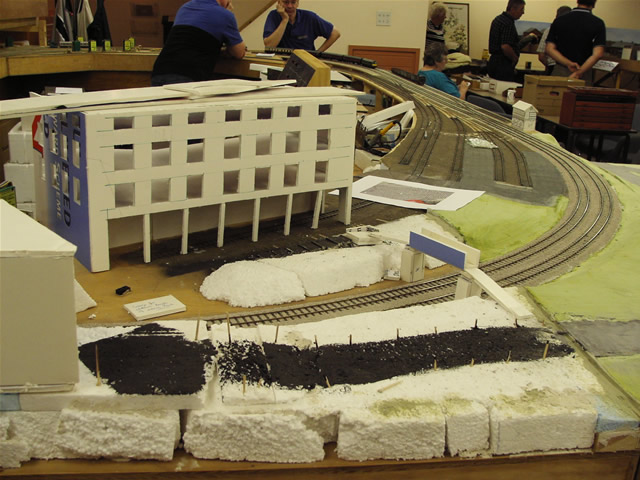 Pretty well all of the available stock was running on 8th December 2007 – but most of it was in the fiddle yard in this photo by David Moore. 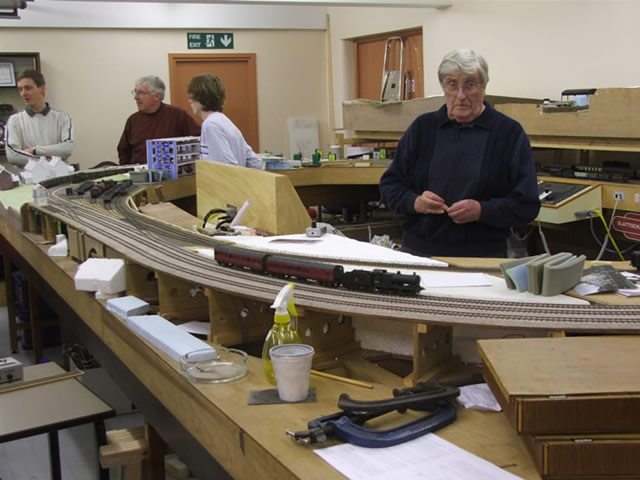 The next three photographs, taken by John Sherratt at the running session in December 2008, show the fiddle yard and the goods yard with a couple of John’s wagons. 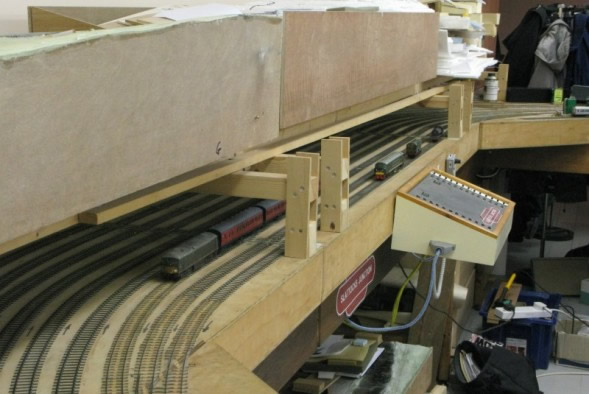 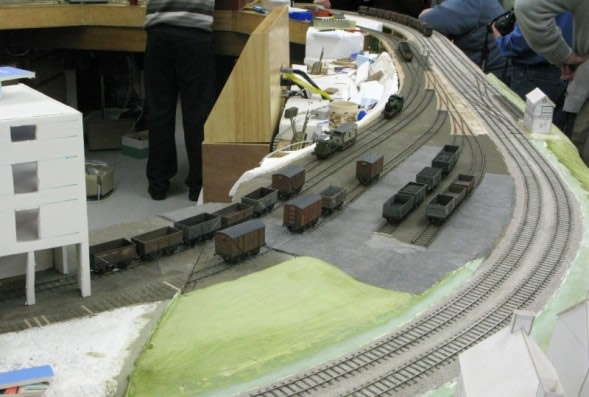 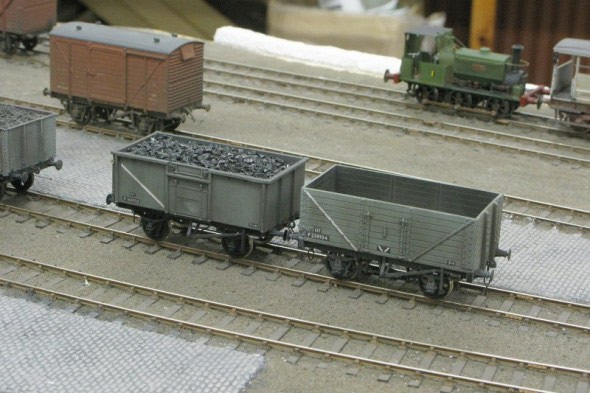 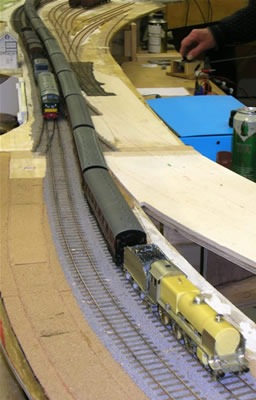 Unfortunately, early in 2009 a problem with the plastic sleepers failing to take paint was noticed.  Reluctantly the decision was taken to pull up the track on the scenic side and relay it, at the same time taking the opportunity to improve the track plan.

By November 2010 much of the main line had been relaid and reballasted and in December 2010 the line was ready to run trains, this photo showing Dick Petter’s unfinished LMS Patriot with a 12 coach train. 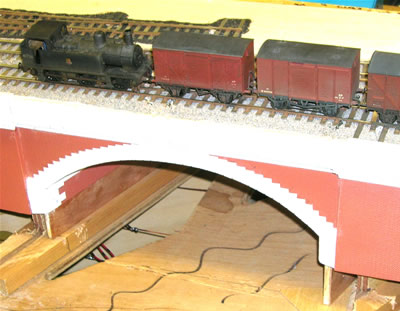 The bridge which will take the canal underneath the line was also in place by the end of 2010. 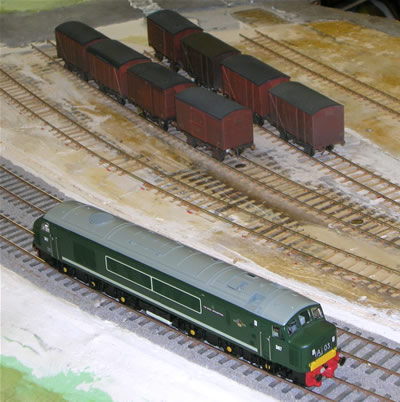 As well as the Patriot a number of other locos were running, including this Peak class diesel. The goods yard in the background has some of the 100 or so wagons being built for the layout.